Codename: Van Buren. This cancelled video game was what Fallout 3 would have been. But did you know that the design team made a pen and paper RPG to test? Chris Avellone takes over the Gamer’s Tavern thanks to our generous Kickstarter backers in order to tell us all about the history of the development of the Fallout 3 that never happened and the unpublished pen and paper RPG they used in development. Listen to this episode and you have a chance to WIN the original pen and paper Van Buren RPG files from Chris Avellone!

Chris wanted us to add the following to the show notes:

Fun fact from Van Buren: Elijah (the villain in Fallout: New Vegas: Dead Money) was supposed to be one of the companions in the first iteration of Fallout: Van Buren (along with Sulik’s sister, who ironically enough, was a slaver). Elijah was a genius-level BoS member who deserted the organization, which was becoming increasing xenophobic due to faction politics, rigid adherence to tech over community, and continual, dangerous use of Stealth Boy tech despite numerous warning signs. Like the Nightkin, the Stealth Boy was beginning to fray some BoS personalities, causing paranoia and psychosis. Overall, Elijah felt the BoS had been poisoned by wrapping itself within a tech shell. (Veronica did not exist.)

Elijah was also a bit more physically fit than his Dead Money counterpart and was skilled in not just high-tech weapons, but also had trained himself extensively in bows, spears, and more “old school” weapons that many BoS members disdained as being “tribal.”

Before Elijah deserted, however, he sabotaged the BoS Power Armor so they could do no more aggression/harm to other communities in the wastes, including NCR (and he sabotaged their armor as a lesson – who are you without these shells that distance you from the world). After this, he went to live with the Cipher tribals. One of the arcs of the game is to convince him to resurrect the Power Armor so the BoS isn’t wiped out (or activate it for a new group of BoS, including the player), or follow the Ciphers, who understand tech better than the BoS due (they worship schematics of the old world).

Easy Roller Dice: Use the code GAMER to get 10% off your order of awesome dice and accessories! 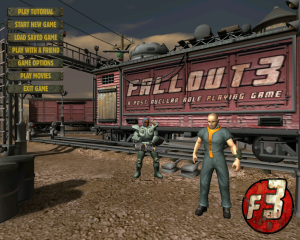 Exodus (RPG that came from the original Fallout RPG)

The Gamer’s Tavern is celebrating its first anniversary! We’re bringing back one of our most popular topics, Gaming Horror Stories! Those funny […]

In our most controversial episode to date, Ross and Darryl discuss the second half of D&D’s history, the Wizards of the Coast/Paizo […]

6 thoughts on “Episode 48: Chris Avellone Takes Over – Fallout Van Buren RPG, or Have a Nice Half-Life”