Now, before anyone comments, I would like to point out that in Japan, the word “sushi” refers to the rice, not the fish. So I’m going to focus on how to prepare the rice for sushi. I also live in rural Southeast Texas, so let me tell you how fucking hilarious it is to hear that “We call that stuff bait” joke. Hint: Not fucking funny! 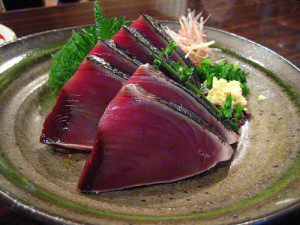 Delicious, but not fucking funny!
Image: “ayustety” via Flikr, CC-BY-SA-2.0

So I’m going to give you recipes that involve completely cooked meats since the recipe for sashimi (the raw fish part of sushi) is basically, well, “Buy really, really fresh fish and cut it the right size”. Which honestly is a technique thing and I haven’t even remotely mastered yet and some itamae (Japanese for “chef” but considered the term for sushi chefs in the Western world) study for years to get it right. Want to know how to cut fish for sushi? Go to a good sushi restaurant and sit at the bar. They cut the fish right in front of you, and it’s best to learn from the masters than from some dork on the internet. 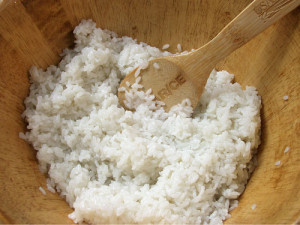 Okay, rice. I love rice, but I hate the boring long-grain rice that’s ubiquitous around here in Southeast Texas due to the influence of Cajun culture. It’s flavorless and every dish it’s served with involves slathering it in a stew or a gravy. Yeah, I love gumbo and all, but no one ever says, “Hey, I love me some gumbo rice! I could eat that all by itself!” Rice around here is used as a filler, the same way other cultures use pasta, bread, or potatoes. It’s a way to stretch the core foodstuffs we actually want to eat.

However, I love medium and short grain rice. Medium grain rice is used mostly in dishes like paella and risotto, which will probably their own article in the future. Short grain rice, however, is best made into sushi. In fact, I tend to consider it a waste to not make sushi out of short grain rice. And it’s so insanely easy to make, I don’t know why people don’t do it at home constantly. Seriously, here’s the recipe.

Place water on to boil. Put the rice in a strainer and rinse until the water comes clear (a few minutes under the sink or 3-5 changes of water if you do it in a bowl). Put rice in boiling water, stir briefly, reduce to simmer, cover, let cook 15 minutes. Remove from heat and let sit covered for 10 minutes. While you’re waiting, add the vinegar to a mixing bowl and whisk as you sprinkle in the sugar and salt. If you have a wooden bowl, you’ll want to use that, but a metal work works fine. Put the rice in the mixing bowl and very gently fold until the rice is room temperature. Form immediately or cover with plastic wrap and refrigerate for up to 2 days.

Easy, huh? Here’s the tricky part. This recipe only works with short grain sushi rice. Want to get the really good stuff from Japan? Yeah, so do I. Japan never, ever, ever exports their rice. Ever. Ever ever ever. Never ever.Trust me, I’ve tried. It’s illegal.

Thankfully, many non-Japanese areas produce very good rice, both domestically and imported. You can find it in most well-stocked grocery stores (seriously, if the Wal-mart in Orange, TX, is selling it, I promise you that you can find it near you), or you can get it online at about twice as much unless you buy bulk. Rice wine vinegar is also important because it has a very distinct flavor that makes up the bulk of what you associate with sushi, and regular white wine vinegar just doesn’t cut it. But again, it’s very easy to find because, well, see above.

What Do I Do With This? 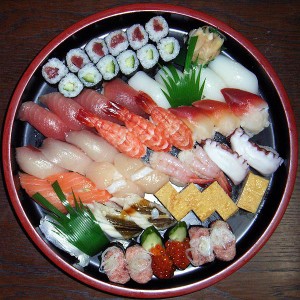 Okay, you’ve made yourself some sushi rice. Now what do you serve with sushi rice? Pretty much anything you want. You’ll want a bit of wasabi paste (either made yourself from powder or you can be lazy and buy it in a tube) because the flavor and punch adds a lot, but it’s not necessary if you don’t like the heat. My favorites are, of course, raw tuna and salmon. But there’s a lot of other things that work very well with the flavors that don’t involve raw fish. Here’s a few you can try. 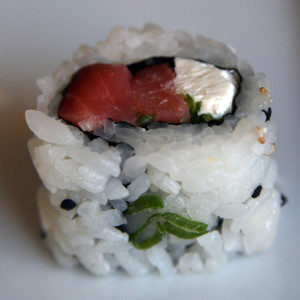 This is far more effort than I ever go through.
Image: Quinn Dombrowski, License CC-BY-SA-2.0

Philadelphia Roll: Okay, I don’t actually make this into a roll unless I’m trying to impress someone because nori (the green wrapper that everyone calls “seaweed” even though it’s not) can be a pain to work with even if you have a traditional bamboo roller. Basically, I mix it all in a bowl and eat it with chopsticks or a spoon. Or I’ll actually make it into traditional bite-sized pieces rather than rolling it. But you want a ratio of 3 parts cooked sushi rice, 1 part cream cheese, 1 part avocado, and 1 part smoked salmon (you can also use crab or imitation “krab” if you can’t get or make smoked salmon (which will be a future column)) with a dab of wasabi and a splash of soy sauce. 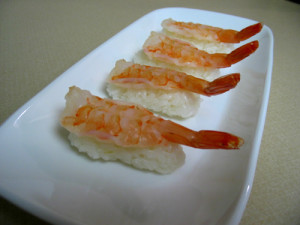 Shimp Nigiri: So easy. You can brine and broil the shrimp yourself or buy the pre-cooked cocktail shrimp. If you want to cook it yourself, mix 1c water, 1/4c sugar, and 1/4c kosher salt together (heating if necessary to get it all to dissolve), then add 2c ice. Add shrimp (21 to 25 count, head off shell on) and store in the fridge for 20-25 minutes. Place them on a baking sheet and broil in the shell for 5 minutes. Let cool, peel, and butterfly

Time out: Butterfly shrimp. You’ve seen it before and might have wondered how to do it. Fuck using a knife, it’s a good way to cut yourself and mangle the shrimp. Best way to do it is with small scissors. Specifically the kind you can find in the make-up aisle at the drug store. Just don’t use them to trim your eyebrows if you’re going to use them on shrimp.

Anyway, form the sushi rice into an oblong in the palm of your hand and press gently until it doesn’t fall apart (wash your hands with cold water between pieces). Put on a dab of wasabi and lay the shrimp on top.

Imagine this, but with sushi rice under it. Sorry, this is kind of a personal recipe and I don’t have a picture handy!
Image: Joshua Bousel, License CC-BY-NC-SA-2.0

Pork Nigiri: Okay, this one’s a bit more involved but it’s one of my favorite ways to serve sushi. I love to make it for closed-minded people who don’t like sushi. I don’t even tell them it’s sushi. I call it “Cold pork rice salad” or something like that. After they try it and love it, then I tell them it’s sushi. Because even though it is fully cooked, it is technically still sushi. By the way, the pork itself is amazing hot too, sweet and tangy and juicy, so this is a really versatile application.

1 lime worth of zest (slice thin strips off the skin or use a grater, just make sure not to get the white part)

1/2 tsp garlic powder (if you can get roasted garlic powder, use that, but the normal stuff is what I normally use since roasted can be hard to find)

Along with that and your sushi rice, you’ll need 2 pounds of pork tenderloin (that’s two regular size ones, and do not get the kind that comes in their own marinades). Here’s the trick with pork tenderloin – there’s a little bit of prep. See, they have something called a silverskin on them that’s chewy and flavorless that you have to remove. You basically just slip your knife under the silverskin and, turning it upward slightly, run it along to cut it off. It’ll take 3-5 strips to get it all. Yeah, that’s a crappy description, but there’s a very nice YouTube video that shows you how to do it.

Okay, here’s where there’s some flexibility in the prep. If you need to do this fast, cut the tenderloins into medallions about 1/2 inch thick first before adding them to a zip top bag with the marinade and refrigerate for about half an hour. If you have the time, add the tenderloin to the marinade whole and refrigerate for 6-8 hours. Frankly, the results are the same either way.

Put a cast iron skillet on the high heat and wait until it’s as hot as it’ll get, since you want to cook these things fast. Add a tiny bit of vegetable oil to the pan, just enough to coat the bottom. Add the medallions one at a time in a pattern that you’re going to remember, because the pan’s going to hold about 10-15 of them and, by the time you get the last one laid down, the first one will be ready to turn (you’ll know because the side that was on the pan will be nice and golden brown). Turn them over in the order you put them down, then check the first one. Seriously, cooking an entire pan full of these things should take you no more than four minutes. You may have to work in batches to get them all done, but they cook so fast that it’s not a problem.

Let them cool for 5-10 minutes on a plate before covering and sticking in the fridge until they’re cold. Make nigiri and place the pork on top. If you’re wanting to fool someone who doesn’t like sushi, mix it all together in a bowl once it’s all cool. I don’t really like wasabi with pork personally, but you can add a tiny sprinkle of cayenne pepper if you want the heat. Or, again, you can serve them hot as well.

Now, I just gave you three of the most Americanized ways to make sushi ever. It’s light, not that filling, and very healthy (unless you get full-fat cream cheese). It’s not nearly the hassle everyone makes it out to be and it’s a great dish to use on those days when you don’t want to get weighed down with heavy foods.

It is with great pleasure that I announce the official launch of Gamer’s Tavern. This website is the central point for what […]

Apparently, eating baked ham with black eyed peas and cabbage on New Years is a Southern thing. I never knew that until […]

If you listened to the most recent Gamer’s Tavern episode, you might have noticed that I seemed to be the Negative Nancy […]