Dating back to the 1930s, Lankhmar may have the oldest pedigree as a gaming setting of all time. Evolving from wargames and eventually becoming a setting for Dungeons & Dragons, Runequest, and Savage Worlds, Lankhmar is the prototype for urban roguish fantasy decades before Waterdeep, Thieves World, or Freeport were a twinkle in their creators’ eyes. Get ready for the original sandbox setting that’s more relevant today than ever before, Lankhmar: The City of Thieves!

Accursed: World of Morden Kickstarter You only have until January 26 to get in on more worldbooks for the Accursed campaign setting.

Audible Want to find out more about Lankhmar? Or keep up with any other books? You can get a free audio book by signing up for a free trail.

Ruins of the North (One Ring) 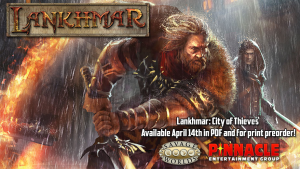 Lankhmar: The City of Thieves

Fafhrd and the Gray Mouser series by Fritz Leiber

The story with the possibly non-consensual sexual encounter: “The Sadness of the Executioner”

Modern technology is changing the gaming world one app and social media page at a time. Jesse Scoble (designer on Silver Age […]

The Gamer’s Tavern is celebrating its first anniversary! We’re bringing back one of our most popular topics, Gaming Horror Stories! Those funny […]

Spending the holidays with the family? Got some non-gamer friends you want to hook on roleplaying? Episode 8 of the Gamer’s Tavern […]