Back in June, I weighed 440 lbs. Shortly before Comicpalooza, the first convention I covered for Ain’t It Cool News, I started to worry about all the walking I’d have to do. When I lived in Austin, I was somewhat active because i walked places. Not the case around here, though, because there’s nothing in walking distance of me. So I ate crap and didn’t get off the couch often enough. I decided enough was enough and started my diet. As of today, I’m at 373 lbs. 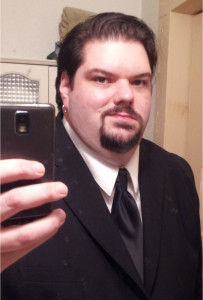 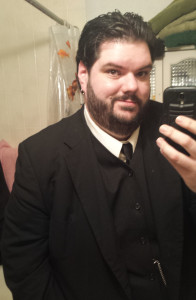 Before and After Bathroom Mirror Pics because I suck at photos

I’m going to tell you a secret about dieting. When you’re just fat, no one says anything about your weight. But the second you say, “I’ve lost over 65 pounds in the last seven months,” you get everyone and their brother coming out of the woodwork telling you how to lose weight. “You should try Atkins! You can eat anything you want except for 4/5 of all the food out there!” or “Man, Paleo is so awesome! Ever hear of a fat caveman? You eat just like our ancestors did, except it’s all processed and raised differently and has different nutritional content and you don’t have to chase a package of Little Sizzlers five miles across the savannah…” Even though I’m obviously not a fan of fad diets, that’s not my problem.

I just fucking told you I lost 15% of my entire body mass. So your response is to tell me how to do the thing I’m already successfully doing?! 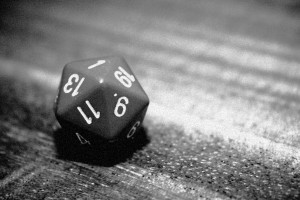 This is your Charisma roll, just now.
Image by Scott Ogle, CC BY 2.0

So how did I go about losing all this weight? It’s this amazing new diet I just heard of! It’s called “Stop eating shitty foods and get your fat ass off the couch every once in a while!” Yes, that sounds flippant, but it’s seriously all I did. It’s really not hard to do either, if you’re wanting to lose some weight as well.

DISCLAIMER: I am not your doctor. You should have a doctor and talk to him or her about your plans to lose weight. You may have health concerns that apply solely to you that make anything I do totally wrong for you. While I encourage you to do your own research, I would also recommend that you trust your doctor. Half an hour reading WebMD or Wikipedia does not replace 8 years of college and medical school, a year of internship, and a year or two of residency.

Here’s the biggest trick to the diet. Learn what nutritional labels mean and read the labels on everything you buy. The suggested diet for most people is about 2000-2500 calories per day, between 45 and 60 grams of fat, and lots of other little things like sodium, carbohydrates, vitamins, and other things. From my experience, though, you can watch the calories and fat and nine times out of ten, you’ll be safe on the other fronts as well.

What I look at, actually, is fat. My personal issues with my diet involve fat rather than calories. I don’t have a big sweet tooth, but I grew up on the Texas/Louisiana border, so I like my food with lots of butter, extra cheese, and/or plenty of gravy. While that’s where I get into trouble, you should really examine what you eat and determine what your personal issues are before addressing them. For example, if you like sweets, then sugar may be your issue. 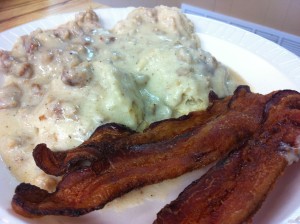 So I decided a plan based on my problem issue. I checked labels for fat. The trick is to check everything. If you’re at a restaurant, don’t assume that the grilled chicken is okay because they might bathe it in butter, or the salad might have an incredibly fatty dressing. If there’s no nutritional information, don’t order it. If a single meal is more than 1/3 of your daily recommended daily intake of calories, fat, or sodium, don’t buy it. This does require some basic math when mixing and matching things, but it’s not terrible. I tend to go for 10-15 grams of fat per meal and 500-800 calories, depending on the meal.

Here’s something important. Avoid artificial sweeteners if you can. This isn’t some anti-chemical thing, but based on science. I repeat, SCIENCE!! Artificial sweeteners hit the same notes in the brain as sugar does, so you still have the same cravings. And if you have a blood sugar issue, it can exasperate things if you over-use them because of the production of insulin. Replacing the sugar in your coffee with an artificial sweetener is okay, but don’t substitute your 4 Coke a day habit with Coke Zero because you’re not really helping. Like everything else, use in moderation.

Another thing I highly recommend (and if you take nothing else from this post, take this) cooking at home as much as you can. This isn’t just me, this is once again SCIENCE!! saying this. Not only is it science, but it’s common sense. If you know what’s going into the food you’re making, you can make more choices about it and that gives you more control of your nutritional health. That’s why I started this blog. If you notice, I go to great lengths (under inspiration of culinary god Alton Brown) to teach you the science behind all this. So you know what every ingredient you’re adding to a dish does and when you can swap it out for something else.  You know when you can substitute skim milk for whole milk, or olive oil for butter because you know what everything does.

There’s one other thing I want to get into I feel is important and that’s body image issues. I’ve been overweight my entire life. Based on my frame, I’m always going to be a big guy. Even if I get to my ideal weight, I’m still going to be big. Here’s the important thing. You should never lose weight because someone else tells you do.

We’re about to post our Romance and Gaming episode this week, and something that came up after the show was an encounter I had on an online dating site. I found someone living local to me in my tiny-ass very conservative and boring rural Texas area who had a picture of her in a haphazard and somewhat sloppily put together Dragonball Z cosplay in the Freiza-saga style armor. But it was an ambitious cosplay attempt I hadn’t seen before since she had a blue spandex bodysuit with painted cardboard armor on top of it. I wanted to get in touch with her because someone willing to make that attempt should be awesome. I wasn’t interested in dating her because several things she said on her profile meant she wasn’t my type, but I wanted a new friend.

Her response to me was to congratulate me on the 60 lbs I’ve lost (at the time I made my profile) and said to message her again “when you lose the other 120.”

What the fuck is wrong with someone to say something like that? I mean I’m not even that angry at the superficial jerk (a said “that angry”). I’m much more curious what happens in someone’s life to think like that. I even told her I wasn’t interested in her that way, but she refused even a friendship because I didn’t meet her aesthetic standards. That is hands down complete bullshit.

If you are active and physically healthy. there is no reason to lose weight unless you want to. At 440 lbs, I wasn’t healthy. At my current 370ish, I’m healthy enough. I walk frequently (the “get off the couch” aspect of my fitness plan) and I don’t have issues with my heart rate, blood pressure, blood sugar, or anything like that. The sole reason why I want to keep losing weight has nothing to do with anyone outside of me. It has to so solely with the fact that I want a three piece suit that fits properly.

The vest really isn’t supposed to be that high up, stupid Big and Tall online stores.

That’s literally the reason why I’m losing weight. It doesn’t have to do with anyone else’s opinion of me, it solely has to do with me wanting to be able to dress better without spending a thousand bucks a suit. There’s nothing wrong with you if you’re “overweight” (and for the record, BMI is fucking bullshit) and you shouldn’t change yourself for any reason unless it’s because you want to.

So again, consult with your doctor to determine your personal health needs, then use these simple tips to help you do what I’ve done so far. My goal is to be down to 325 by GenCon in August, and it’ll be a tough ride. But I’m on track so far and I highly recommend you do it if you feel like losing weight. Simply start reading food labels and don’t get something that looks bad. Eat better, cook for yourself, get out of your chair once in a while, and feel better about yourself. Just make sure you do it for you and no one else.

I’m half Cajun from both sides of my family – my mother and my father both are half Cajun. I can trace […] 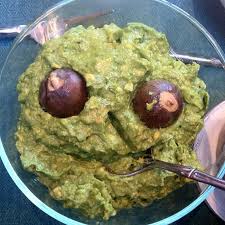 So if you haven’t read the article I did on deep frying, do so now because you need to know those basics […]

This is the backstory of my character for the upcoming Shadowrun Actual Play podcast, Kyle Rogers aka “Babysitter”   “What happened?” Higashi-san […]